The One and the Many 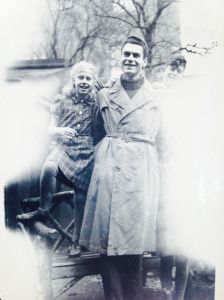 I met Claudia at a North London tavern. I was anxiously searching the pages of the Saturday Times for the Letters to the Editor section, to make sure that my indignant plea to the editor on the phone had succeeded to stop the shameless education correspondent from publishing a garbled version of the piece I had submitted.

“Do you know where the Letters page in this paper appear?” I had never read the Times of London when I absentmindedly emailed the paper my piece,

“I myself am quite fond of the Independent, and have written to that editor frequently.” Claudia offers.

If there is a sure sign that one is a newcomer to town, it is the inability to match people to papers: I could tell that she was cultivated and British; but I could not tell whether it was public school or state school, whether classics at Oxford or political science at Sheffield.

It was the Fincancial Times Correspondent on maternity leave I had met at the same spot the week before had given me the idea of writing an op-ed piece. I had given her my laptop, just so that I could hold her irresistible baby for a moment while she read my notes. I had very quickly understood the enviable effects of a classics training at Oxford.

But it was more than the language skills that had kept me from writing for the Opinion Pages: until then public opinion had been only a matter of scholarly and theoretical formulation for me: Habermas’ Structural Transformation of Public Sphere; Gramsci’s “Organic Intellectual”; Immanuel Kant, “What is Enlightenment?” I knew these texts very well and taught them regularly. But I had never thought of actually addressing the public myself, or a newspaper editor I had never met. How would I do that?

The article that became a Letter-to-the-Editor-of-the-Times-of-London-Suppressed had its origin as a letter to B.  But after our last meeting in person, I had asked for a punctuation in our correspondence. In his absence, he was morphing… into the general public.

But then I had become sick with the feeling of promiscuity.

I had a distinct sinking feeling that my letter-to-the-editor, about university policy and practice, and specifically student debt and the intellectual mission of the university, involved a betrayal.  But who I was betraying? My students whom I wrote about? The university who paid my salary? Myself, who might be put in danger for the speaking on controversial matters?

None of these rang true.

I am typically not afraid of the direct and dangerous, even provocative thought. The sense of betrayal was overwhelming enough though to make me work very hard to stop its publication.

Claudia confirmed the dangers involved in writing on a computer connected to the internet. It is too easy to push the send button prematurely. I asked her where she was from– being an outsider does allow you to be edgy—and what she had written about for the Independent. She told me she had come to London from Germany when she was a child, just before the start of the War. Her family had been identified as Jewish in Germany despite their own identification with the poetic tradition of Holderlin and Goethe. Claudia recounted the history of her family’s migration to England in precise detail. She especially lit up when she mentioned Konrad. Konrad, the youngest of his father’s brothers, was an idealistic 18-year-old when he arrived in the UK in 1939. He fell in love with Jeanie, an English girl, before he was shipped off aboard the infamous Dunera to Australia.   On the Dunera he began writing, on brown toilet paper, letters addressed to Jeanie — whom he had decided he was going to marry. He continued to write Jeanie almost daily for two years while in an internment camp in the Australian Bush. He wrote a last feverish poem to Jeanie on his way back to the UK to reunite with Jeanie..

They met only once after his arrival.

Konrad had hinted to Claudia at the existence of his letters. After he died, Claudia broached the topic with his widow, and found the epistles in the attic. Claudia deciphered and transcribed the letters and duly deposited them with the British Library’s Modern Manuscript collection including her own introduction. But the last time she had checked, it was not in the catalogue. Perhaps his widow never signed the last of the paperwork? But if I wanted, she said, she would email me her own copies. We exchanged email addresses.

I wanted to read those letters. The letters to ‘the one.’

I went to the British Library to check the public archives the next morning.  It would have been easier to accept Claudia’s offer, and get the documents in an email attachment. But I chose the search in the archive, which is after all, the most familiar and reassuring place for me. The archive, the accessible place which is not public; is hidden but not forbidden, waiting to be found. I feel safe in the archives. It is my realm.   Indignant when I did not find the document in the catalogue, I wrote the curator of the modern manuscripts to inquire.

I also asked Claudia for her copy, advising her of the situation at the BL.   Claudia sent me her copy immediately.   And that night I read two years of Konrad’s letters to Jeanie breathlessly.

A week after, Claudia forwarded me an email from the British Library Curator stating that in fact the document had not been catalogued but since an “American academic” had brought attention to this important and neglected part of UK history the letters should not remain suppressed. They were going to be catalogued and their descriptions uploaded on internet promptly.

I was mortified. That familiar feeling again. “Claudia, can you please stop Konrad’s letters from becoming public?”

The betrayal, when we publish, is betrayal of the intimacy that occasioned our writing. I sent my Letter to the editor suppressed to B instead. And decided the nature of the punctuation. 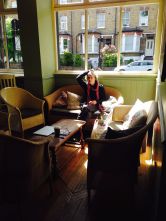 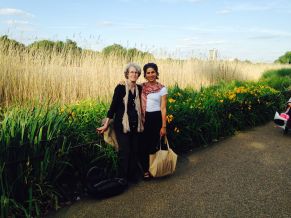